== Personal Data ==
Street Name: Tipperman
Name: Matthew Mayfield
Age: 54
Description: Weathered brown skin, full bushy black beard, black hair worn short, he is almost always wearing a hat to help cover a scar on the right side where not much hair grows. He walks with good energy and grace, but often looks a bit tentative when picking up objects, as if he wasn’t quite sure where his hands are. (although once he is handling things he is very deft)

Family:
==
Born to human parents in 2026, Matthew was classified as a late UGE baby. His older sister Laura was human.

Matthew’s Father was somewhat distant to the young dwarf, his discomfort with the physical difference hard to hide. Nonetheless he did teach his son how to fight, on the theory that as a meta, Matthew would have to be able to defend himself. He was an electrician but was frequently out of work during Matthew’s early years, and would pick up whatever under-the-table tasks he could, and this brought somewhat shady characters into their apartment on a regular basis. In the 2040s he picked up work in the construction of the Renraku Arcology. Which ended tragically a decade later.

Matthew’s mother was african-american school teacher. Having grown up with pre-goblinization racism she recognized the dangers of the rising tide of meta-racism. She worked hard to integrate her son into human society, and taught him the protective value of networking such that even casual racists might have a ‘no, I don’t mean Matthew, he’s an OK guy’ feeling. As a school teacher she was a big believer in reading with children and Matthew grew up on nursery rhymes, fairy tales, and classic kids’ stories. Working in the ever more depleted public education system wore her down and her husband’s death in the Renraku lock-down broke her spirit. Still it took until 2063 for her to drink herself to death.

Laura had caught on with a Fuchi subsidiary right out of college, and over the years worked first software quality assurance and then project management, with a succession of Fuchi, Novatech, and Neonet branded companies. Although not especially close with her brother she did help him land his first decent job, doing plant maintenance at Fuchi. She moved to the NeoNet headquarters in Boston in 2071, and she and her husband have not been heard from since the lockdown there. Their son was at college in Toronto at the time, and is currently waiting tables while trying to make it as a techno-hillbilly guitar player.

Education and Career:
======
Matthew was always more interested in working with his hands than on a keyboard, but thanks to his Mother’s coaching he made it through high school and into a technical college where he studied HVAC systems. With his sister’s help this eventually led to work for Fuchi.
Due to a rising tide of Shadowrun incursions much of his early work was retrofitting HVAC systems to improve security, and Matthew used the opportunity to network with the security teams.

After the fall of Fuchi he used his contacts to get hired into security at Novatech. With discipline and hard work he gained the notice of some of the shadier assets in the company, and in the late fifties started getting augmented and doing some corporate heavy work. Over time he rose to more senior positions, managing groups that combined official responsibilities with off-the-books roles. By the early 2070s he was involved in quite a senior role, even taking some tasks directly from Caroline Villiers (who was then running the shady side of the Seattle office).

He was known as a straight-talking straight-shooter, being somewhat unusual in the shadow operations for not covering dirty deeds with double talk, and being relatively open about what was going on.

Injury and Fall:
===
In August of 2073 Matthew was investigating a rumored plan to assassinate Samantha Villiers. He no longer remembers much about his capture and torture, but he does remember the repeated use of overloaded stun batons on conductive parts of his ’ware, including the crazed hallucinations that hit him when the safety features on the antenna port of his internal commlink finally broke down, and the conducted electricity burned out his link and datajack and cooked some of the surrounding brain tissue.

He was eventually recovered by some of his team, and given urgent hospital treatment. He recovered, sort of. The abuse of his already aging ’ware had clearly taken a toll on his system, but a bigger problem was the brain damage and memory loss. His thoughts were clouded, his speech often odd, his personality erratic, and his previous knowledge of various technical skills now mostly garbled.

He tried to return to his former position but higher ups wouldn’t allow it, and his stubborn personal code-of-conduct was not suited to the solo missions that they chose for him. He was put on medical leave and into intensive therapy and rehab for a couple of months, then suddenly he received notice that he was being fired for incompetence and disloyalty.

He found himself on the streets, having a hard time keeping time and reality sorted in his head when the news of the Boston quarantine hit. He tried to travel there to rescue his sister, but found himself blocked, leading to anxiety, outbursts, harassment at the hands of KE beat cops and gangers, and a drift more and more to the outer fringes of society.

- He was married for several years in the ’50 to Hannah, a human woman, and they had one son (Andrew). The marriage failed for many reasons of which Tipperman will accept the majority. Hannah was in Boston when the lockdown happened. Andrew is in St. Louis and has been estranged from Tipperman since his teens.

- He rose to run teams and operations. He had a reputation as a straight shooter, and worked well with local law enforcement to minimize friction. He even did some work for Caro (Caroline Villiers) during her time running shadow ops in Seattle.

- He eventually took a brain injury, changing his behavior. Maybe if it wasn’t during the CFD scare, and if NeoNet hadn’t been collapsing he would have gotten better care. As it was he tried to carry on in his job, but couldn’t, and was fired.

- The company may have fired him, but that didn’t stop him from helping old friends inside. Despite his new eccentricities he helped a number of people get through the gutting of Neonet. Combine that with people he did favors for, if not outright saved, over the years and there are a number of ex-Neonet types who still look out for him, and other old professional contacts who have called up from time to time.

- Aside from helping old friends, he felt like a discarded piece of trash, cut loose and missing some of his old skills and clarity of thought. He somewhat deliberately chose Glow City as a place where he wouldn’t have to live for another hundred plus years in this state, and where he wouldn’t be as likely to have to kill people just to have a squat.

- Somehow this all gelled in his mind as a hatred for waste, and the disposable culture in general. His ranting about how we just tip everything into the rubbish earned him the nickname Tipperman.

- He started working to save garbage in Glow City. He did some cleaning up, he did some scavenging, and he helped some of the other residents. Altruism is rare enough there that many think he is completely crazy, but a few became fairly loyal to him.

- He recently found a definitely-not-from-the-barrens young woman on the banks of Beaver Lake, having apparently managed to pull herself out of the water before drowning or getting an immediately lethal radiation dosage. She’s had some crude surgery that might have been to cut out some ’ware. Once she regained consciousness she turned out to be a complete amnesiac, aside from nightmares about situations that range from unlikely to impossible. Some of the removed ’ware was in her head, and he hopes the damage is not permanent

- Tipperman is trying to help her (with little success so far), and is now looking to make enough money to hire some more professional help for her. He is probably somewhere between fellow-feeling for brain injuries, feeling adoptive-paternal, and hidden deep-down maybe a bit in love with this foundling (this is his dependent quality). 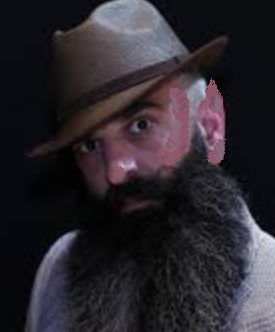