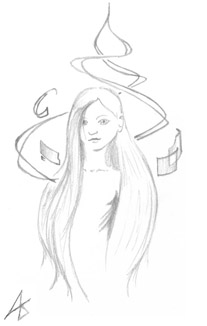 The Matrix Phenomenon / Connection 8
Description: Nobody seems to have much information on Aria, where she came from, who she is… her ‘little girl persona’ is a feature in the Seattle matrix and she pops up and meddles in the most unusual digital locations. She has occasionally alluded to having a ‘master’ which is a rare thing in the seventies and a term usually only used to refer to the dragons but she has never, as far as anyone knows, been identified out of the matrix and there are rumours that she is an AI despite a clear ability to manipulate Resonance energies

Preferred Runners: Tolerant ones, her charming laugh and whimsical attitude has been known to grate
Uses: Matrix intel
Places to Meet: The Citadel Gaming Host, other matrix sites both shadowy and more mundane
Contact: Commcode
Available: When she feels like it